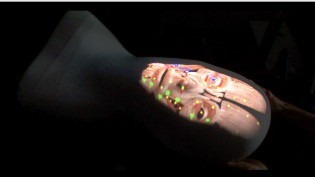 A research group at Gifu University is developing a virtual anatomical model. It is currently being used as a medical teaching resource to educate users about cerebral nerves.

“This object has a sensor which detects its position and orientation, so when you move it like this, the picture moves with it. First of all, you can use this capability to bring the picture and the object together. When you look from that side, I think things appear quite distorted, but to someone looking though this window, which has another sensor, it appears as if there’s a virtual object within this object. To someone else, it looks distorted, but seen through my eyes, it looks as if the projected image is in line with the moving 3D view.”