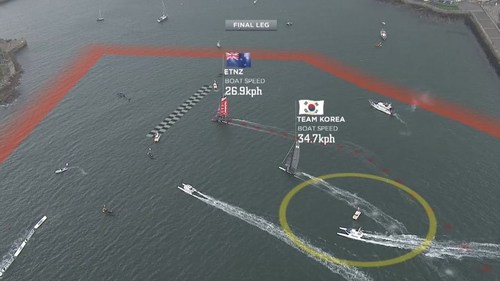 Boat or bird? More a wing than a sail, the powerful carbon-fiber airfoil of the Oracle Team USA’s boat speeds it across the water during a training run.

As a TV sport, sailboat racing is relegated to the same sorts of channels and time slots as bowling and poker: They’re worse than those for fishing and golf. The problem is that even passionate sailing fans can find it hard to follow races on television, where producers cut back and forth between video of the boats and animated simulations of the action, attempting to show where the boats are in relation to one another. If you’re channel surfing and you come upon a yacht race and have no idea which boat is in the lead, what would you do? Change the channel, probably.

That’s a shame, because sailboat racing is as thrilling, dynamic, and suspenseful as any sport around—if you’re down there on the water with the boats, that is. And starting with the 2013 America’s Cup, to be held this month in San Francisco, you will be there, virtually speaking. You’ll be able to monitor the events live on TV and on your mobile devices. You’ll see the spray flying off the bow of a big racing catamaran as its crew scrambles to make high-speed maneuvers in a stiff wind. You’ll see the world’s top sailors grappling to control powerful vessels driven by sail-like vertical wings, 12 stories high. You’ll also see perspectives and information never before available to spectators: the tracks of the boats through the water, course boundaries, penalties issued, wind direction, speed, and other things that significantly affect the outcome of the race. Automatic tracking systems on each yacht will constantly feed position data to high-performance PCs on shore. Custom-built augmented-reality software will turn the position data into informative onscreen graphics in real time. The graphics will look as if they’re painted on the water—essentially, a streaming “chalk talk” of race progress. Audio and video streams from the boats, virtual course marks “drawn” in real time on the televised water, and computer-controlled cameras on helicopters will all contribute to the viewing experience for those in front of televisions at home or standing near giant screens onshore.