Digital is the New Salvation for European Newspapers 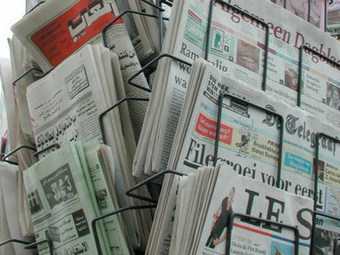 European newspapers have often been shielded by the same issues plaguing their counterparts in North America.

State subsidies often keep an unprofitable companies afloat, while advertising revenue continues to dwindle. In France, newspapers received €800 million in state subsidies and tax breaks last year, while tiny Greece boasted about 70 newspapers before the crisis, many fed by ads from state-owned companies.

The system of government subsidies for European newspapers is starting to crumble, as the Euro Zone crisis gains momentum. Last year, France’s La Tribune became weekly, while the owner of Spain’s El Pais is near insolvent. Dozens of publications in Spain and Greece have folded. In Italy, general advertising spending hit a twenty year low in 2012 and state subsidies have dropped 60% since 2006, while sales of Italian newspapers are down 22% in the last five years. According to an Oxford University study, only 5% of Italian readers have home subscriptions to newspapers in general, compared with 25% in the U.S.

The lack of government funding is prompting the newspaper companies to go digital, but they are very unprepared for this new frontier because they relied on handouts for so long. Writers are being forced to write for the physical and digital brands at the same time, effectively doubling their workflow.

The Wall Street Journal mentioned that “In France, newspapers also have had to play catch-up online, given that overall circulation is down by nearly a third in four years and direct government subsidies to the press are projected to slide 29% by 2015 from their 2010 peak. Le Monde only began merging its online and offline newsrooms last year, after a group of investors—including a tech tycoon—bought control of the paper in a bid to save it from bankruptcy. The problem: Le Monde’s website had been owned until late 2011 in a separate joint venture. Now things are speeding up online. Le Monde says it has 120,000 paying online subscribers, and last year clawed to a narrow operating profit.”

The one bright spot in Europe right now is Germany, where newspaper companies often have never received government subsidies and had to remain autonomously profitable. Revenue is down just 10% since 2008, according to the Association of German Newspaper Publishers. Two-thirds of German adults still read print newspapers regularly, and a number of publishers have adopted online paywalls.

European newspapers in Greece, France, and Italy are in big trouble. The big ones are all owned by wealthy owners more interested in power than profits. State subsidies are drying up and most are ill-prepared to capitalize on digital distribution. For the first time they are being forced to adopt online models and overwork their writing staff to simultaneously publish on both platforms. No one is really happy during this transitional period and the public needs to be educated on exactly what is happening before more newspaper companies fold under the pressure.