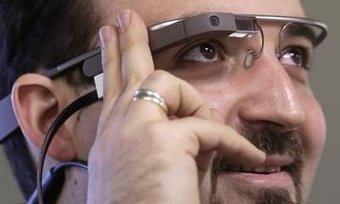 Google’s new Glass eyewear will allow users to download and listen to music, the company has revealed.

The augmented-reality gadget, which uses voice commands to flash up information on a tiny screen and take pictures and videos on a pin camera, has been reconfigured to recognise the words “listen to”.

Users will be able to search for songs and scan through saved playlists.

Tracks from Google Play, the online media and apps store, are then streamed through the newly-launched Glass Earbuds, which plug into the headset and feature interchangeable coloured caps.

Ed Sanders, marketing director of Google Glass, told the New York Times : "With these new features, we’re now building a great music experience on Glass, whether you’re a classical music professor, an acclaimed sound engineer and hip-hop producer, or someone who wants to listen to their favourite tunes anytime, anywhere."

However, a spokesman for Google UK said there were "no plans" to launch or expand Glass outside of the US at present.

The tech giant launched its Explorer programme earlier this year to allow Americans with an interest in the device to shape its development.