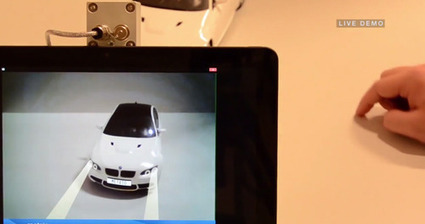 Metaio, the world leader in Augmented Reality (AR) software and solutions today made public research and development for a never-before-seen user interface that combines thermal imaging with augmented reality. The technology company released a video today illustrating potential applications of “Thermal Touch” interface along with current examples of the working prototype. Metaio will also share the demonstration with the emerging technology community at the 2014 Augmented World Expo in Santa Clara, CA, May 27-May 29.

“Everyone is talking about wearable computing eyewear like Google Glass,” said Metaio CTO Peter Meier, “but no one is talking about the best way to actually use those devices. We need natural, convenient interface to navigate the technology of tomorrow, and that’s why we developed ‘Thermal Touch’.”

Consisting of an infrared and standard camera working in tandem and running on a tablet PC, the prototype registers the heat signature left by a person’s finger when touching a surface. Metaio’s AR software then supplements the experience with AR and computer vision to allow the user to interact with digital content in all-new tactile way.

The best graphic user interface (GUI) for wearable headsets has yet to be determined – device makers have so far experimented with voice navigation, companion devices and even projection, but in order for consumers to adopt new technology on a massive level it needs to be convenient and, above all, accessible in countless scenarios.

With “Thermal Touch”, a wearable headset user could turn any surface into a touch-screen: Imagine pushing directions to your device simply by touching a static map in a shopping mall, building complex or airport; children could bring play to new levels and launch digital content directly from their toys; design professionals could visualize their digital and 3-D creations on their real world counterparts; and service technicians could pull up information just by touching an object in real life.

“Thermal Touch” is a prototype and far from everyday usability. Metaio released the demo to educate the community on the possibilities of computer vision. It is likely that in 5-10 years infrared cameras may join a multitude of advanced sensors being integrated into devices everyday, including the wearable augmented reality headsets of the near future.

Metaio will display the “Thermal Touch” prototype at the 2014 Augmented World Expo in Santa Clara, May 27-29. Though “Thermal Touch” may be 5 years away from reality, attendees to AWE will nonetheless get the chance to see the latest automotive, consumer and enterprise AR apps that are driving innovation and value in 2014.

To see Thermal Touch in action, watch the video at