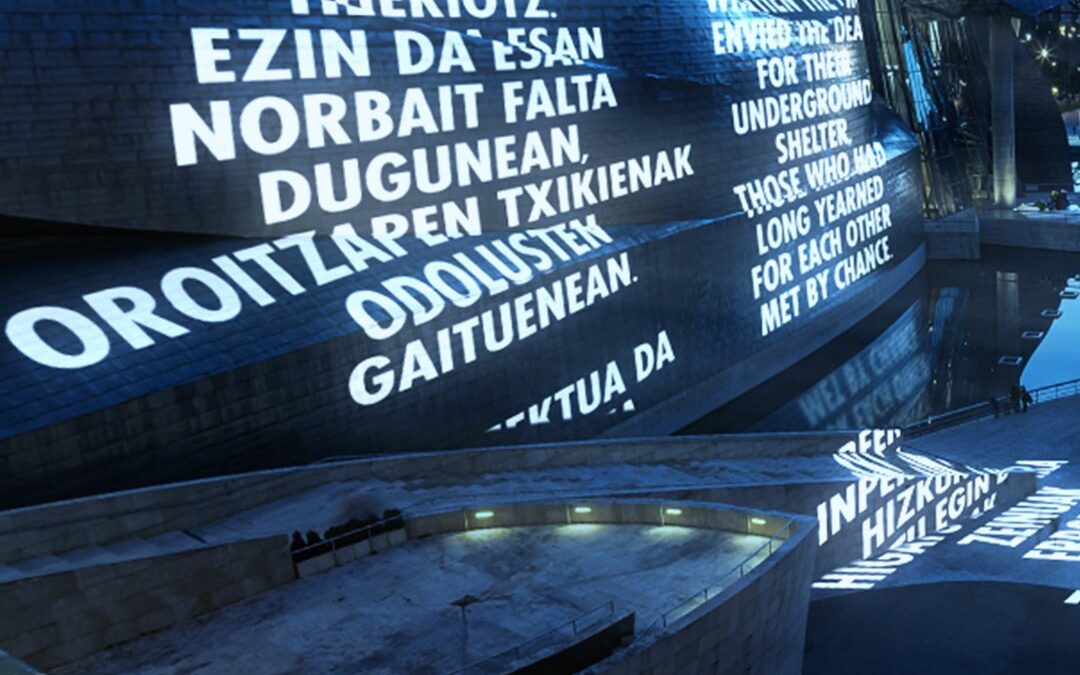 LIKE BEAUTY IN FLAMES is a new work by renowned artist Jenny Holzer that presents her signature text-based art through the medium of augmented reality (AR). This unique artwork, made exclusively for the Guggenheim Museum Bilbao and accessed through a standalone application for mobile devices, provides three distinct AR experiences—two site-specific works that engage the Guggenheim Bilbao’s architecture and a third that can be accessed from anywhere in the world. LIKE BEAUTY IN FLAMES harnesses new technology in a continuation of what Holzer does best: placing thought-provoking texts in the public sphere in a democratic and accessible way.

For over four decades, Holzer has experimented with the written word, constantly innovating strategies for the display of her works. Texts—sometimes the artist’s own, other times quotations by writers she admires—appear in bold fonts chosen for their direct, approachable quality. Since 1996 she has projected words in light onto landscapes and architecture, an act of ephemeral graffiti that recalls her early practice of pasting anonymous Truisms posters on the streets of New York City. The Truisms, comprising over 250 single-sentence declarations, embody a range of voices and viewpoints, eliciting diverse responses. The artist has a long-standing interest in appropriating the modes and media of official communication, presenting compelling messages on news screens, bronze plaques, and stone benches as well as T-shirts, condom wrappers, and pencils. Her work has long occupied an important place in public art, often through temporary offerings such as arresting large-scale projections and roving digital billboard trucks emblazoned with her texts. Her voice remains resonant and courageous, inviting viewer engagement through the simple act of reading. 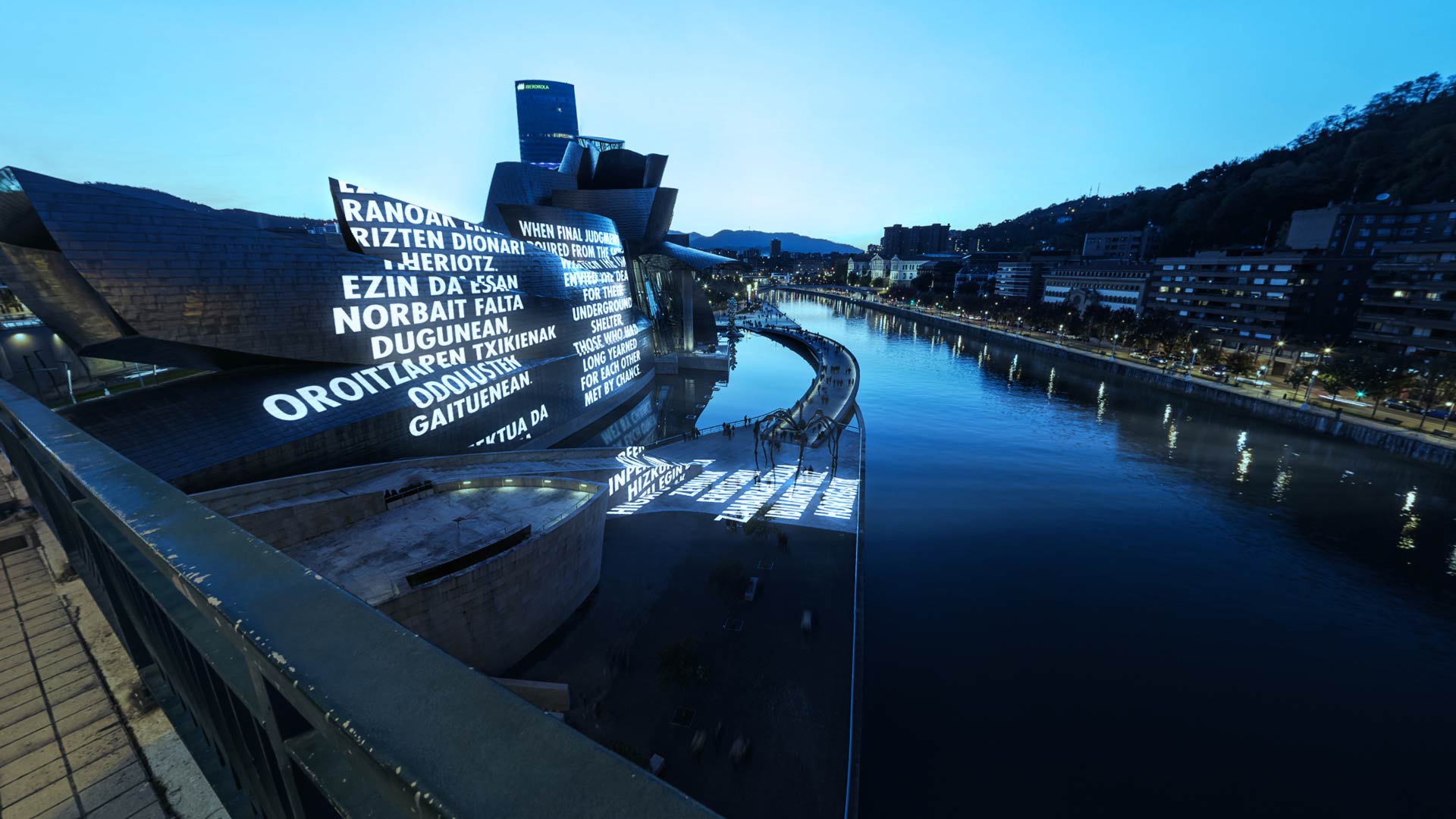 At the Guggenheim Bilbao, an AR version of one of Holzer’s signature LED signs glides through the central Atrium, the column bending and spiraling as Truisms in English, Spanish, Basque, and French scroll past. Each of the museum’s three floors provides a different experience, as the LED’s interaction with the building’s architecture shifts depending on one’s vantage point. Outside, AR projections appear on the museum’s facade from five locations around the campus in a virtual echo of the artist’s monumental 2019 work For Bilbao, which was presented in conjunction with her retrospective exhibition Thing Indescribable. The texts selected by Holzer for the AR projections are by other authors; the work’s title, LIKE BEAUTY IN FLAMES, is borrowed from Polish poet Anna Świrszczyńska’s poem “Beauty Dies,” one of the many arresting texts that Holzer has made into immaterial spectacle. The artwork’s final component can be accessed from anywhere in the world and enables users to see Holzer’s Truisms take form in space over any live view. This new possibility embodies the spirit that has informed Holzer’s practice throughout her long career of placing language in the public domain to spark reflection and contemplation.

THE IMPACT ON PUBLIC SPACE

The public space surrounding the Guggenheim Museum Bilbao is the setting for one of three augmented reality experiences designed as part of the app LIKE BEAUTY IN FLAMES. Bilbao residents and visitors can look for the QR codes at five points around the museum, open the app and enjoy virtual light projections on the facade.

This immersive and dynamic artwork is made possible by a mobile app that uses AR to provide unlimited access to three virtual experiences. Harnessing augmented reality, advanced image-recognition technology, 3D spatial positioning and cutting-edge graphics features, users can watch the AR version of the LED sign move through the museum’s atrium. They can also see a recreation of Holzer’s nighttime projections, facilitated by their devices’ GPS and gyroscope features, which direct them to various points around the outside of the museum. Combining digital technologies with the real-world, this innovative mobile app developed by London-based digital agency Holition brings Holzer’s practice to users’ own mobile devices.

LIKE BEAUTY IN FLAMES demonstrates a commitment on the part of the Guggenheim Museum Bilbao to technology in the arts. This project marks the beginning of a three-year plan to present pioneering projects in which technology is central to the artwork.